In Irish tradition and folklore, the leprechaun is an ancient fairy with magical powers. The image of the leprechaun has become well known to people throughout the world. He is usually small in stature and wears green clothes with a hat.

Leprechauns have been said 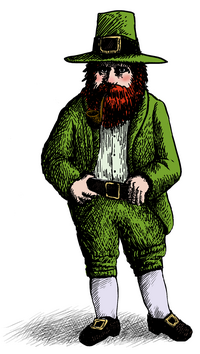 to enjoy playing tricks on people and causing mischief throughout the land. It is said that if a person manages to catch one then the creature must give the human a pot of gold. Other versions of the traditional story state that a leprechaun must grant the catcher three wishes, similar to a genie in other ancient cultures.

Some stories state that leprechauns enjoy making and mending shoes. They also say that the creatures tend to hide their pots of gold at the end of rainbows. They are solitary in nature and prefer to be left alone so that they can work on their shoe making skills.

The leprechaun has extended outwards from folklore to become a part of global popular culture. Unfortunately the image we now know today of the leprechaun has stemmed from derogatory stereotypes that can be seen as offensive to the Irish people.

That stock image of the leprechaun bears little resemblance to the one talked about in historical documents. It can be seen in an abundance of advertising as well as in films, television and video games.

In 2006 a popular internet video emerged and was viewed by a large number of people. It depicted a news report about a possible leprechaun sighting in the US. Citizens in Alabama are shown searching for the leprechaun in order to gain its pot of gold. The lighthearted video alleges that the leprechaun is hiding in a nearby tree. It ends with a self proclaimed leprechaun hunter stating that he will soon find the creature.